None of the following pictures were planned or posed.

I have somewhere around 50 or 60 nieces and nephews. One of them reminds me of me. Both of us are extremely fashion conscious.

This little guy is named Calvin. Take careful notice as this is probably the only time you’ll ever see him with matching shoes on the right feet.

This is the real Calvin. Always has one shoe on for athletics and one thong on for the beach. (At least that’s how we would have described him 40 years ago.) 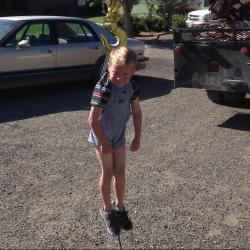 I feel bad for him because he IS so much like me. We both like hanging around where the action is. As you can see, he’s not well grounded. His shoes are on the wrong feet. They’re also untied. I deal with these same problems to this day. He’s probably safer being suspended by his overall straps than tripping around on his shoelaces.

We both grew up in the same house. We’re both still growing up. Calvin’s got a year or two left before he’s fully grown. I’ve got a couple of weeks before I hit maturation. Just ask my wife.

We both learned to drive at four years of age. The only difference is my dad wasn’t in the truck when I first started. He was bucking hay bales onto the back of the truck. Calvin’s first drive was 2016. Mine was 1959. I’m sorry about the great camera work.

On the plus side, we both love the heck out of life as Cal is demonstrating here. We both enjoy wearing creative footwear when attending church. We both cry when my brother Brent wants to hold our hand.

It’s probably lucky that neither of us has a good sense of smell.

Last year Calvin’s mom hid their TV remote up high on the door chime box. Five minutes later she caught Calvin retrieving the remote. All on his own. That kid is going to go places.

Calvin’s sister went on a mission for her church. I guess they lock them up so they can’t change their mind later. Calvin wanted to see her one last time. So he did. This picture was taken after the gate keeper told him to get lost.

Calvin’s a kidder and is teaching me the same trait. It takes a long time to pick it up since it’s not in my natural nature. But day by day, as Calvin the Kidder patiently extends helpful pointers and gives me homework, I think I’m slowly grasping his art. What I picked up from Calvin is included in my book.

One Reply to “Calvin minus Hobbs”